Landscape paintings are a very popular form of art. By learning more about them, you could help make yourself love and appreciate them even more. 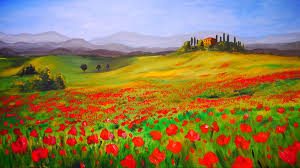 When you are searching for prints or posters to add to your walls, you will very often find several paintings that are completed by a landscape artist. Originals from the master painters are probably not in your price range, but a print or reproduction is probably more in your budget. This makes the landscapes by such artists as Monet, Constable, and Pissarro very accessible to all kinds of people.

Amateur artists most often choose landscapes for their first works. This may be due to the lack of studio space and the ease in which it is possible to find a subject out in the natural world. Most landscape artists before the time of Impressionism, painted inside their home or studio, working by memory or from drawings. Monet and Renoir took their work outside and were considered weird because they did so.

Landscape painting is done in many countries. Landscapes are particular predominant in Japan, Holland, the United States, France, and Britain. European landscape artists were influenced by two Japanese artists during the 19th century. Hokusai and Hiroshige painted images of mountain ranges, forests, and the ocean using bright colors. From the twentieth century forward, other forms of art began to occupy the time and effort of artists and critics. Abstract Expressionism, Surrealism, and Cubism became much more popular. This has made landscape painting somewhat unfashionable.

Most of the general public still loves purchasing and looking at landscapes. They feel very connected to the subject and this is even more evident when it reminds them of an area in their past. A portrait or still life will not evoke the same kind of response in most cases. You will find in looking at landscape paintings that some painters paint the same area. Paul Cezanne was a big example of this, due to the fact that he painted the same mountain range around eight times. The Montagne Sainte Victoire, near his home in France, became one of his favorite subjects. He enjoyed painting it in different seasons and different weather conditions.

Two of the first European landscape artists to paint the ocean were Rembrandt and Vermeer, both Dutch painters. Some artists enjoy painting sky and water as their recurring themes. JMW Turner, and English artists, enjoyed painting seas and stormy skies, but his paintings later turned to a more abstract painting of blurring the sea and the skies together. Monet perfected his water technique by sitting in a rowboat on the water. This helped him to get as close as possible to his subject. Winslow Homer and Andrew Wyeth are well-known American landscape artists who are well known for their ability to capture light on the water.

Most of the early artists concentrated on the landscapes because they were so different from anything they had seen. Many of the artists were from other countries that went to Australia. Check the internet for galleries or museums for listings of shows and times. Aboriginal culture was an important part of their paintings. So many great painters through the years have done Australia great justice with their paintings.

Thanks to this tree removal near me for supporting our site!